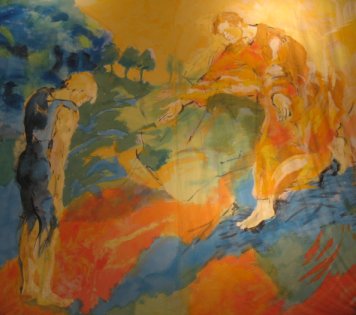 Initially, in 2010, this was an initiative oft the catholic organisation "Aid to the Church in Need", cf: Action Ninive.

Read in 5 steps what's behind.

The holy bible tells us the interactive story between the Father (God) and his child (mankind). Mankind did not pass the first examination: Instead of the complete trusting regarding the Father, the child set its mistrust and the resulting disobedience (sin fall of the first two humans Adam and Eve). Before, Father and child kept an unstrained company. Thereafter, the child needed education measures of the father in order to bring the child back on the way to complete trusting. From that on God was no longer noticeable perceivable for the child. Although, the Father again and again elected some children (prophets, mystics, saints) during the common history in order to communicate with them in familiarity, similar as in in the first times. When the turn of times was reached the Father came himself - with the shape of simple man (Jesus) - to the mankind and taught himself the way of return, obedience, love and trusting.

Hence, in order to re-achieve the initial state of mankind, the first step must be the return ("Repent and believe the good news", Mr 1:15): From Self-trusting to God trusting. Accompanied are changes from pride (I can do this and that just by myself) to devotion (God knows, what is best for me; he let me succeed this an that), from self-fulfilment (I determine myself the direction of my life) to obedience (God knows, what is best for me; his advices and laws are for my very best, that's why I follow them). Under these conditions (return, obedience, trusting) the common love between Father and child will grow. And when the child speaks (prays) to the Father, the Father will hear and answers the prayers of the child ("Which of you fathers, if your son asks for a fish, will give him a snake instead?", Lu 11:11).

Since in the world today self-trusting, pride, self-fulfilment - briefly ignorance of the divine Father and human egoism dominate, He basically eaves us ourselves. Due to lacking interest in common welfare and the inability to appraise the complex consequences of its own action for the future, mankind is slivering in increasing catastrophes. Nevertheless, the merciful Father does not leave us without warnings, which he transmitted through all times via His prophets and mystics to the people. Mostly however, the child has not listened to the warning of the father - and the bitter prophecy has come true. But there are some few positive reactions of mankind documented in which he returned and followed trustfully the directive of the Father. The return of Ninive is such an example which is cited in the following.

Book of Jonah 3:1-10 : God saw, that they returned and that they turned from their evil ways

1 Then the word of the LORD came to Jonah a second time:
2 Go to the great city of Nineveh and proclaim to it the message I give you.
3 Jonah obeyed the word of the LORD and went to Nineveh. Now Nineveh was a very important city- a visit required three days.
4 On the first day, Jonah started into the city. He proclaimed: Forty more days and Nineveh will be overturned.
5 The Ninevites believed God. They declared a fast, and all of them, from the greatest to the least, put on sackcloth.
6 When the news reached the king of Nineveh, he rose from his throne, took off his royal robes, covered himself with sackcloth and sat down in the dust.
7 Then he issued a proclamation in Nineveh: By the decree of the king and his nobles: Do not let any man or beast, herd or flock, taste anything; do not let them eat or drink.
8 But let man and beast be covered with sackcloth. Let everyone call urgently on God. Let them give up their evil ways and their violence.
9 Who knows? God may yet relent and with compassion turn from his fierce anger so that we will not perish.
10 When God saw what they did and how they turned from their evil ways, he had compassion and did not bring upon them the destruction he had threatened.

Within a second step following return and allegiance, the prayer of the child will become powerful (the episode of the battle of Israel under prayer is cited below) and the divine Father answers the prayers of His children at their best.

10 So Joshua fought the Amalekites as Moses had ordered, and Moses, Aaron and Hur went to the top of the hill.
11 As long as Moses held up his hands, the Israelites were winning, but whenever he lowered his hands, the Amalekites were winning.
12 When Moses' hands grew tired, they took a stone and put it under him and he sat on it. Aaron and Hur held his hands up- one on one side, one on the other- so that his hands remained steady till sunset.
13 So Joshua overcame the Amalekite army with the sword.
14 Then the LORD said to Moses, Write this on a scroll as something to be remembered and make sure that Joshua hears it, because I will completely blot out the memory of Amalek from under heaven.

Powerful then will be also the prayers to Mary, mother of God. Because she is His master work and since she stayed immaculate, obedient and always trusting - as it was the first human in the beginning - she preferentially enjoys the trusting of the divine Father among mankind. Mary wants nothing for herself, but she ennobles and enhances our prayers. Therefore it is prudent, to hand over all prayers to her. The following well known episode reveals her outstanding position as mediator of human petitions and divine mercies.

In principal mankind has already been saved by the salvation work of Jesus. However, if we do not follow Jesus and act like him, we behave like unsaved people in former times and we defeat the divine salvation work. Then, as in former times, sin falls back on ourselves. Now, mankind has been warned by many (church approved) divine revelations (La Salette, Fatima, ...) that it approaches its decline. Until now this has been poorly noticed, but global catastrophes (e.g. 2010 oil pollution in the Golf of Mexico, 2011 Japan earthquake & Fukushima atomic worst case scenario) increase more and more and hence speak a clear speech: We continue reaching the abyss, if we do not return to God.

Thus, what can we still do to anticipate our downfall?

The catholic organisation "Aid to the Church in Need" in 2010 has indicated a solution and elaborated an action: "Action Ninive".

So, let's simply do it like the people in old times in Ninive:

Hence: Act now!
We then can be assured, that everything will become possible: "Who then can be saved? (...) With man this is impossible, but with God all things are possible" (Mt 19:25-26)

Writing on the wall above Moscow

On 26.11.2007 a huge sign in the sky occurred in south Moscow:
A large white hand appeared and wrote for half an hour 10 sentences in the sky.

The writing could be read for three hours. Millions of people could see it and were stuck with fear. All traffic stopped. The transmitter of this incredible event is a priest-missionary serving in Russia.

The words in the sky were as follows:

1. The evil overwhelms the good!
2. My people lives in a permanent winter!
3. There is no fruit, not even a flower.
4. This is the day of vengeance (retribution) and wailing.
5. No straight soul will maintain besides the crooked and no crooked soul close to the straight.
6. Care for your salvation!
7. Generate fruits of repentance!
8. I will b able to save those who fear the Lord.
9. Act that way that you can give account;
10. Be certain (see), I am coming soon.

► Witnesses wanted: If you have seen this event, please give us your testimony.
Please mail to: